Home » TYPES » Mesembs » Conicosia pugioniformis subsp. alborosea
Back to Category Overview
Total images in all categories: 11,528
Total number of hits on all images: 6,614,453 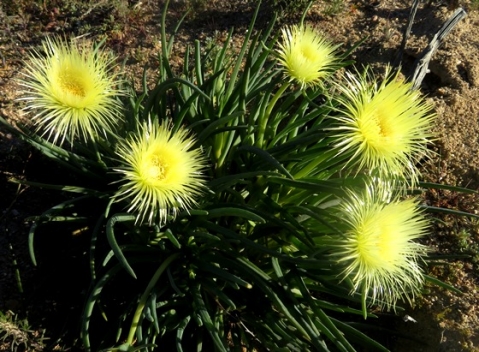 Conicosia pugioniformis subsp. alborosea is a perennial mesemb that branches at ground level, reaching 30 cm in height. Below the leaf rosettes the elongated stem parts become more or less bare with spaced markings where leaves had dropped off, or a few spaced, opposite leaves persisting.

The very succulent leaves grow in dense, erect rosettes. The leaf-shape is thin, triangular in cross-section to semi-cylindrical, tapering to a pointed tip. The leaves are smooth and blue-green, sometimes channelled on the upper, or inner surface. Only some of the leaves are shed in the hot and dry summer, green patches formed by these plants persisting on the ground when the rest of the surroundings turns brown.

This is the subspecies of C. pugioniformis that one finds in the Northern Cape. The other two occur further south, mainly in the Western Cape.

The habitat is sandy soil of the west coast plain and towards the klipkoppe. The plant tends to appear on disturbed ground. These plants are sometimes only biennial, depending on conditions. The photo was taken at Naries, not far west of Springbok. This subspecies is not considered to be threatened in its habitat early in the twenty first century (Frandsen, 2017; Le Roux, et al, 2005; Smith, et al, 1998; Herre, 1971; iNaturalist; http://redlist.sanbi.org).