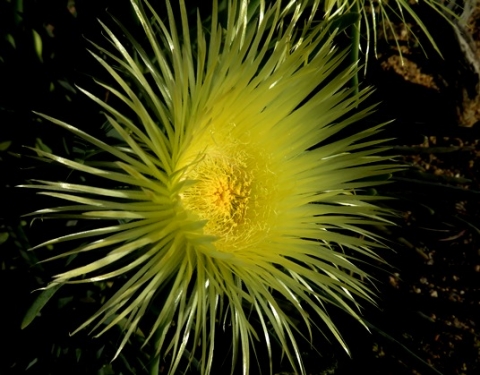 An abundance of thin, shiny petals spread in several whorls around the flower centre. The soft petals curve out slightly as they taper to their tips; tiny water cells occurring on their margins. The numerous stamens in the flower centre start off curved in, later erect, exposing the stigmas. There are also numerous staminodes or antherless, sterile stamens. These flowers may exude a less than pleasant odour. Flowering occurs from late winter to mid-spring, depending on rain. The photo was taken early in August west of Springbok.

The fruit, initially tapering in a fleshy green cone at the top, later displays 16 to 22 brown valves upon its narrow locules. The generic name, Conicosia, is partly derived from the Greek konikos meaning cone, referring to the fruit capsule shape. Two seed pockets are found in each locule on the inside of the outer wall. There are no expanding keels. The valves open in dry conditions, not responding to moisture, releasing their smooth, nearly spherical seeds (Frandsen, 2017; Le Roux, et al, 2005; Smith, et al, 1998; Herre, 1971).