Home » TYPES » Mesembs » Cylindrophyllum tugwelliae
Back to Category Overview
Total images in all categories: 12,061
Total number of hits on all images: 7,360,002 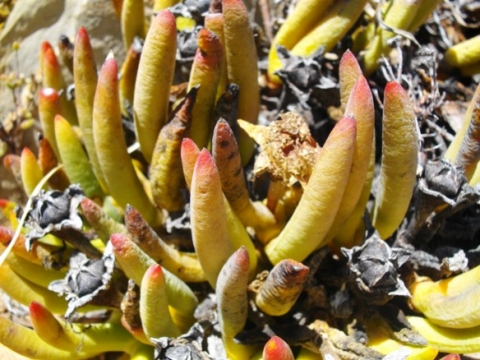 Cylindrophyllum tugwelliae, sometimes called Tugwell’s vygie, is one of six species in this genus of clumping or tufted succulent perennials with cylindrical leaves. They grow in the Karoo. The plants are sometimes mixed up with Bijlia tugwelliae that grows near Prince Albert, but does not have cylindrical leaves and produces yellow flowers. They are also confused with Cephalophyllum species that have thinner leaves (Vlok and Schutte Vlok, 2010).

Tugwell's vygie has large mesemb type flowers (5 cm across) and are borne on stalks of 1 or 2 cm. In the flower centre there is a big cone of stamens and staminodes (rudimentary, sterile or underdeveloped stamens). The styles are awl-shaped and shorter than the stamens.

The flower's allure lies mainly in the surrounding petals arranged in a thin and often uneven whorl. They are long and cream, light pink or whitish, becoming paler as the flower ages. Flowers appear in spring and are open during the afternoon only (Smith, et al, 1998).