Home » TYPES » Mesembs » Carpobrotus acinaciformis
Back to Category Overview
Total images in all categories: 11,921
Total number of hits on all images: 7,168,564 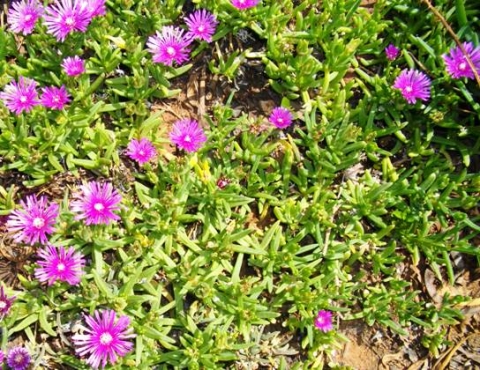 The spreading habit of Carpobrotus plants makes this densely matted ground cover both attractive and functional in stabilising bare ground, especially on problem slopes. The plant will perform in poor soil and needs little watering after having been established. It thrives in full sun, but is frost tender.

Carpobrotus flowers are the largest in the Aizoaceae or mesemb family. They open each morning, close at sunset. Each flower is solitary, borne above the leaves on a stalk characterised by two toothed bracts halfway up its length. The five sepals are identical in some species, markedly unequal in others, such as Carpobrotus acinaciformis. Two exceed the others in length. Flowering lasts from end winter to midsummer.

The fruits of Carpobrotus plants generally do not open, holding on to their seeds until they are old and dry. The fruit of C. acinaciformis is used in some medicines for treating tuberculosis and other lung infections (Smith, et al, 1998; www.plantzafrica.com).