Home » TYPES » Mesembs » Cerochlamys pachyphylla
Back to Category Overview
Total images in all categories: 11,506
Total number of hits on all images: 6,488,606 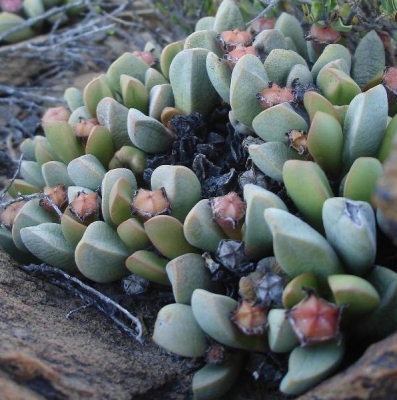 Cerochlamys pachyphylla, in Afrikaans known as pronkvingertjies (little flaunt fingers), is a clump-forming leaf succulent. The Cerochlamys genus is monotypic, comprising only the one species.

The purple-pink flowering form is common; white ones are seen occasionally while yellow flowers occur only rarely. The white flowers arrive earlier than the other forms. The form variations raise issues about a possible second species that should be differentiated, not (yet) agreed to. The species blooms from late autumn through winter.

Some young, red and fleshy fruit capsules, as well as pale grey desiccated ones from a season earlier, are visible on the plant in picture. Each capsule has five locules. The locule has a broad, expanding keel, but no valve wings. When the capsule opens, the valve only reaches a vertical position. The seeds are ovoid and slightly rough.

C. pachyphylla is endemic to a region in the west of the Little Karoo. It grows on rocky outcrops of sandstone and conglomerate in various veld types. The plant is not considered threatened in habitat early in the twenty first century.

Being a winter rainfall plant, usually receiving little rain, suggests the indications for watering to growers. It is not a difficult plant to grow, either from seed or cuttings by dividing clumps. A container receiving sun or a well-drained rockery in a sunny place should yield good results (Smith, et al, 1998; Vlok and Schutte-Vlok, 2010; www.redlist.sanbi.org).