Home » TYPES » Mesembs » Carpobrotus deliciosus
Back to Category Overview
Total images in all categories: 11,506
Total number of hits on all images: 6,488,618 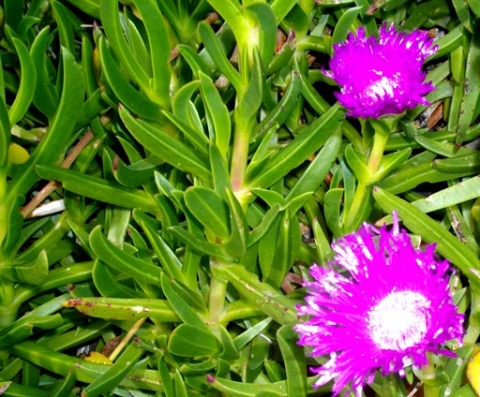 Carpobrotus deliciosus, commonly known as suurvy (sour fig) in Afrikaans and as gaukum in Khoi, is a perennial leaf-succulent that grows thick branches becoming 2,5 m long. The trailing branches root at the nodes, forming a leafy mat useful in covering and stabilising land.

The opposite leaf pairs, spaced by notable internodes are succulent, smooth and green; straight or slightly in-curving and erect. Like the leaves of other Carpobrotus species they are sharply three-angled in cross-section. The deep, cartilaginous keel curves in at the leaf tip. The leaves become 12 mm to 18 mm in diameter.

The species distribution along the southern Cape coast eastwards from Riversdale continues along the Eastern Cape coast to the south of KwaZulu-Natal and slightly inland in parts including the Langkloof, Kouga and Baviaanskloof.

The habitat is sand dunes and flats, also rocky grassland among fynbos and scrub. The species is not considered to be threatened in its habitat early in the twenty first century (Manning, 2009; Moriarty, 1997; Bond and Goldblatt, 1984; iSpot; www.redlist.sanbi.org).