Home » TYPES » Mesembs » Bijlia dilatata
Back to Category Overview
Total images in all categories: 11,538
Total number of hits on all images: 6,618,306 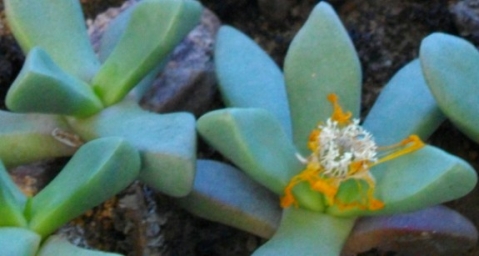 Bijlia dilatata, commonly known as the Prince Albert vygie and previously scientifically as B. cana, is a dwarf mesemb, a leaf succulent growing only a few branches at ground level. Sparse rosettes are formed by the leaf pairs that are decussate, i.e. growing opposite each other, succeeding the previous pair in perpendicular position.

The species has a small distribution in the south of the Great Karoo near Prince Albert north of the Swartberg Mountains. The plants are found in silcrete patches and generally exposed among rocks, often growing from crevices in what appears hard living conditions, even for a Karoo succulent. The species is considered to be endangered in its habitat early in the twenty first century, mainly on account of grazing by stock.

There is a second species in this small genus: B. tugwelliae of the same region grows thinner, more upright leaves. This species is considered vulnerable early in the twenty first century, due to habitat replacement by farming and township developments (Smith, et al, 1998;  Labarre, (Ed.), 1931; www.llifle.com; www.redlist.sanbi.org).