Home » TYPES » Mesembs » Carpanthea pomeridiana
Back to Category Overview
Total images in all categories: 11,538
Total number of hits on all images: 6,618,641 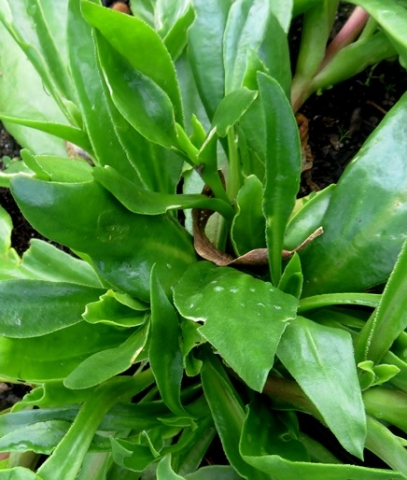 The stems are coarsely woolly and fleshy, the paired, opposite leaves thinly succulent. The flat leaves are broadly lanceolate to spatulate with hair-like papillae or elongated water cells along the margins.

Similar papillae are present upon the calyces that have five unequal lobes. The outer two are leaf-like, the inner three smaller, their margins membranous.

The golden-yellow flowers grow solitary at stem-tips or in groups of up to three. The several rows of narrow petals are reddish on their lower surfaces. They spread around the yellow flower centres where thread-like staminodes surround the stamens. The flowers open in sunlight, furl at night. Flowering happens in late spring to early summer.

The fruit has 12 to 18 narrow locules. The narrow capsule valves have expanding keels ending in awns.

The species distribution is along the west coast from the Cape Peninsula to the southern extreme of the Northern Cape.

The habitat is sandy flats in whitish soils among strandveld and coastal fynbos. The species is not considered to be threatened in its habitat early in the twenty first century (Manning, 2007; Bond and Goldblatt, 1984; http://redlist.sanbi.org).