Beauty and the fly 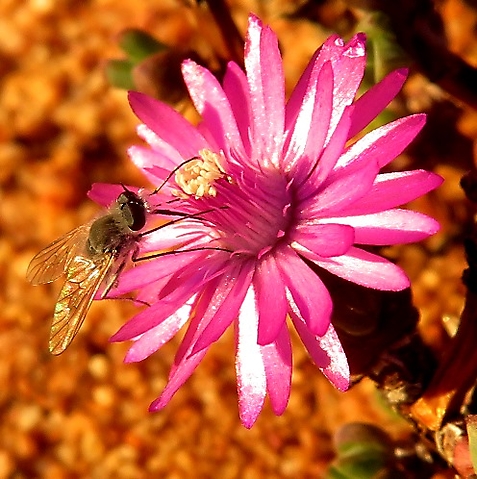 Neither the flower of the Aizoaceae family, nor the fly of the Diptera order featuring in this photo has been fully identified. Delicate features of both saved the photo from being discarded.

Spreading pink-purple petals in a few differently angled rows, cohering stamens ending in whitish anthers and surrounding staminodes, their filaments of different lengths lacking anthers, or any part of all this (plus the nectar) attracted the fly.

A fly uses only one of its two pairs of wings to fly. The other pair, adapted organs called halteres, allows it to perform aerial acrobatics of all sorts and act as sensors. Sudden spotting of something edible while on the wing requires a prompt reaction and manoeuvring versatility.

Although second to the bees of the world as pollinators, the Diptera is a major insect order, also important in the pollination role.

Diptera is a very diverse grouping, including house flies, blow flies, mosquitoes, gnats, black flies, midges and fruit flies, estimated at more than a quarter of a million species, many of which still waiting to be studied and described (Wikipedia).