Home » TYPES » Herbs » Coleus neochilus inflorescence
Back to Category Overview
Total images in all categories: 11,769
Total number of hits on all images: 6,918,707 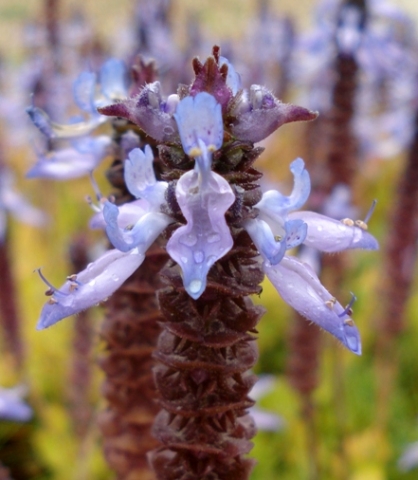 The flowers of Coleus neochilus, previously Plectranthus neochilus are produced in terminal spikes on erectly carried branch tips. The pale blue corolla is two-lipped, the lower one bigger and conspicuous. This lower lip, seen from the front in the photo, has an angularly zigzag shape.

The specific name, neochilus, refers to this lip, made up of the Greek word neos meaning new and cheilos meaning lip. The smaller upper lip, its tip curving into an erect position, has two broad and shallow lobes in the centre, tiny ones on the sides.

There are four short stamens with globular yellow anthers around a tall blue style with tiny stigma branches at its tip. The dark, purple calyces remain on the spike around the ripening ovaries below the open flowers on the spike; only few flowers being open on the spike at any one time.

The inflorescence shown here has just about reached the last buds to open at the top of the spike; when there are buds left above the open flowers, the shape of that part of the spike is neatly square (Germishuizen and Fabian, 1982; Eliovson, 1984).