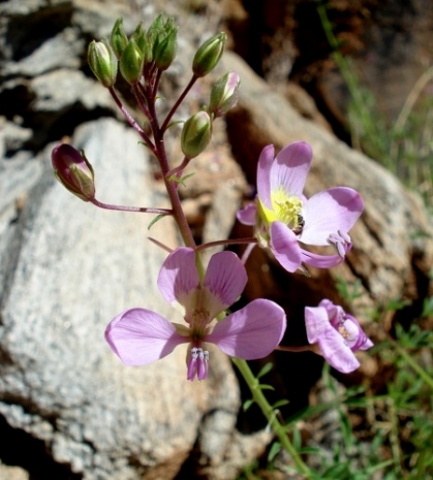 The family affiliation of the Cleome genus truly challenges the amateur botanist! Fifty years ago Riley (1963) wrote that the family of the Cleome genus was Capparidaceae. By 1982 Germishuizen and Fabian had the name as modified to Capparaceae. Van Wyk and Malan (1997) placed the genus in the Boraginaceae family. By 2009 Manning names the family as Brassicaceae, while Wikipedia says in 2013 that “in accordance with DNA studies” the genus properly belongs in its own, narrower family called Cleomaceae.

Judging from the photo of the member of the clan depicted here, Cleome oxyphylla var. oxyphylla, one can deduce a feminine character, easily branded by male chauvinists to be fickle and prone to frequent mind and surname changes. By 2020 she may well be called Van der Merwe. If gravity (Shakespearian sadness) is adhered to in this matter, one may be positive about the fast growth of scientific knowledge, rather than carp about the vacillation of botanical minds.