Home » TYPES » Herbs » Coleus neochilus
Back to Category Overview
Total images in all categories: 11,905
Total number of hits on all images: 7,155,711 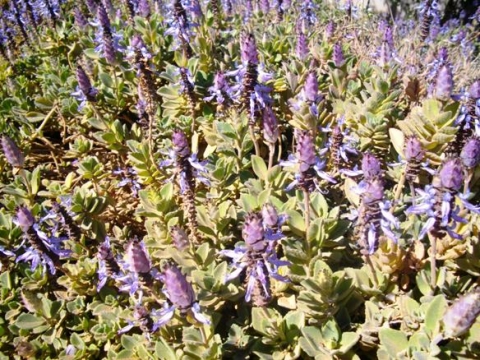 The lobster flower or spur flower, botanically known as Coleus neochilus and previously as Plectranthus neochilus, is a hardy, low-growing perennial in South Africa. In colder climates it is sometimes an annual. The roots are sometimes tuberous. The plant spreads as a groundcover into a dense mat, reaching heights over 50 cm in flower.

The grey-green, hairy leaves are succulent and aromatic, although the aroma is not considered pleasant by all. The deep blue and purple flowers are numerous during the warmer months of the year.

The species distribution is widespread across the eastern parts of South Africa and some neighbouring countries.

The habitat is dry thicket and open, rocky woodland. The species is not considered to be threatened in its habitat early in the twenty first century.

Some believe that the spur flower keeps snakes away from the house (the smell?) and will therefore grow it. The plant grows well in full sun or shade and does not require much water but responds well to watering (Pooley, 1998; www.plantzafrica.com; www.smgrowers.com; http://redlist.sanbi.org).