Home » TYPES » Herbs » Commelina africana
Back to Category Overview
Total images in all categories: 11,921
Total number of hits on all images: 7,169,951 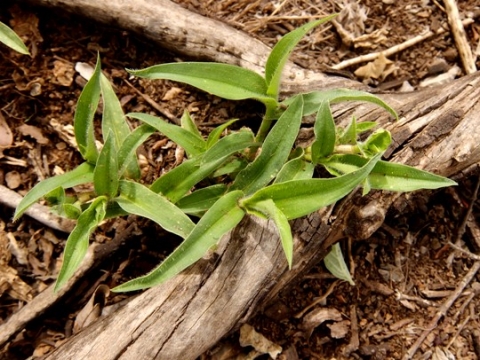 Commelina africana is a spreading perennial that grows both trailing and erect stems reaching 50 cm in length. The small, woody rootstock has long, thick roots. The plant is quite variable.

The hairy or hairless leaves are stalkless, alternate and sheathing the stem. The leaf-shape is linear, varying in width and tapering to an acutely pointed tip. Leaf margins are entire and may be partly wavy, curving or folding in.

C. africana is common on rocky outcrops of grassland along the south coast and eastern parts of South Africa, as well as in tropical Africa. The species is not considered to be threatened in its habitat early in the twenty first century.

Four varieties are currently recognised, some bearing flat, hairless leaves, others with hairy, folded ones. Flower size and spathe shapes also differ. The varieties are all of least concern in survival terms (Van Wyk and Malan, 1997; Manning, 2009; www.plantzafrica.com; http://redlist.sanbi.org).