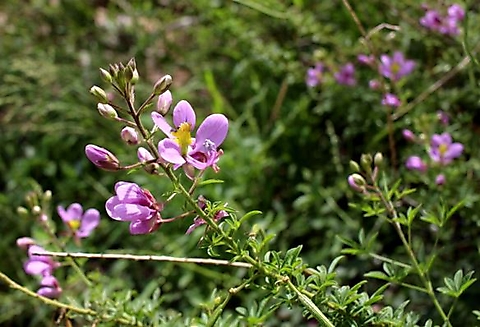 The aromatic leaves are digitately divided, comprising five to seven leaflets. The leaflets are linear to spoon-shaped, usually folded in along their midribs and lacking petiolules. The leaf itself has a petiole that is glandular-haired and up to 2 cm long, shorter on leaves in the upper plant parts.

The species distribution is widespread in the north of South Africa, occurring in all the provinces north of the Vaal River, the Free State and Northern Cape, as well as in some neighbouring countries.

The habitat is sandy soils in dry, open areas, the plants often found in places where the vegetation has been ploughed or otherwise disturbed. The species is not considered to be threatened in its habitat early in the twenty first century (Van Rooyen and Van Rooyen, 2019; Van Wyk and Malan, 1997; Germishuizen and Fabian, 1982; iNaturalist; www.botswanaflora.com; http://redlist.sanbi.org).