Home » TYPES » Herbs » Anchusa capensis, hairy plant and its hairy pollinator
Back to Category Overview
Total images in all categories: 12,091
Total number of hits on all images: 7,393,262 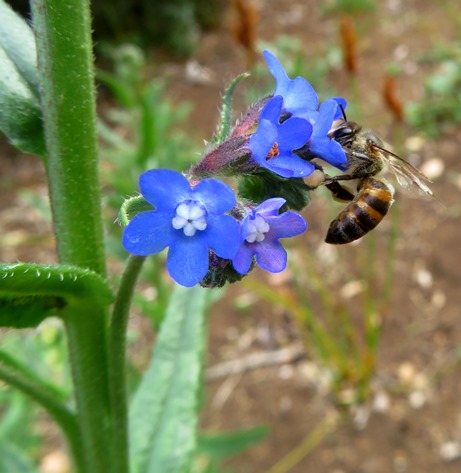 The stems and leaves of Anchusa capensis are faintly to coarsely hairy, quite different in hairiness between stem and leaf margin in picture; the sepals in picture somewhat inbetween.

The calyx is deeply five-lobed, the narrow, hairy lobes green and purple around the (hidden) cylindrical corolla tube. The round-tipped blue petal lobes spread to about 5 mm in flower diameter.

The five white scales in the corolla mouth opposite the corolla lobes cover the tube but do not discourage or impede the bee. It has to pass them for reaching the five blunt anthers and “by planned accident” also the stigma at the style-tip of the superior ovary (Vlok and Schutte-Vlok, 2015; Manning, 2009; Le Roux, et al, 2005; iNaturalist).