Home » TYPES » Herbs » Anchusa capensis
Back to Category Overview
Total images in all categories: 12,086
Total number of hits on all images: 7,381,071 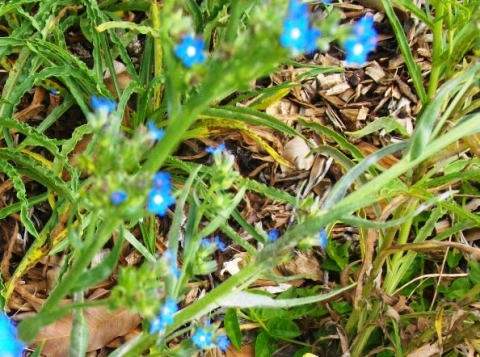 Anchusa capensis, the Cape forget-me-not, is a strong growing annual or sometimes perennial up to 1 m in height. The much branched, tall stems taper much in the upper parts of mature plants. Stems may be red to purple when young.

The sessile leaves are narrow and hairy. The spring flowers are borne on thin upper branches. They are five-petalled, bright blue with whitish centres. There are hairy scales inside the flower around the stamens and style.

The plant grows in most of southern and central parts of South Africa. It is also notable in the Namaqualand spring display. It is often found in areas where natural vegetation has been disturbed, such as roadsides and fallow agricultural land on dry, sandy ground. The species is not considered to be threatened in its habitat early in the twenty first century (Manning, 2009; Bond and Goldblatt, 1984; www.plantzafrica.com; http://redlist.sanbi.org).