Home » TYPES » Herbs » Anemone fanninii
Back to Category Overview
Total images in all categories: 12,086
Total number of hits on all images: 7,380,998 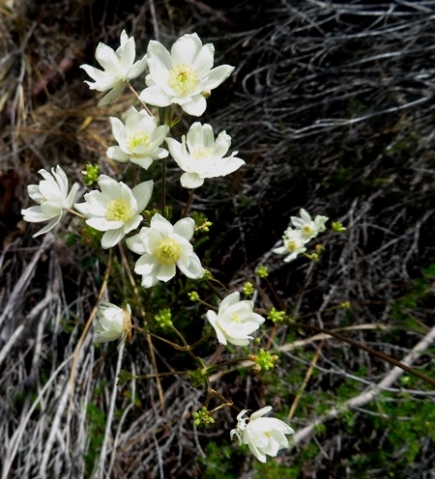 Anemone fanninii, commonly the giant wild anemone and in Afrikaans syblom (silk flower), is a perennial growing from a strong rootstock and reaching heights around 1,2 m.

The large, palmate leaves grow on long stalks, developing fully only after flowering. The leaves have five to seven rounded lobes with red-tipped marginal teeth. Leaf diameter is about 35 cm. The leaves are velvety above, hairy below, the veins sunken on the upper surfaces of the soft, dull to dark green blades that are thick-textured and fold in.

The species distribution is in the Eastern Cape, KwaZulu-Natal and the Free State from the coast to the Drakensberg, as well as in Lesotho. The photo was taken in Langkloof fynbos southwest of Louterwater.

The habitat is moist places in grassland and fynbos along streams, drainage lines and seeps. The plant is considered to be near threatened in its habitat early in the twenty first century, due to harvesting of plant parts for the traditional medicine trade (Pooley, 1998; iNaturalist; http://pza.sanbi.org; http://redlist.sanbi.org).