Home » TYPES » Herbs » Annesorhiza altiscapa
Back to Category Overview
Total images in all categories: 12,068
Total number of hits on all images: 7,363,176 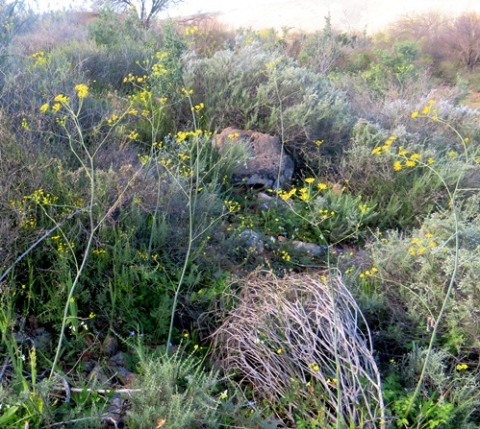 Annesorhiza altiscapa, in Afrikaans commonly known as anyswortel (anise or aniseed root), is a slender perennial reaching heights from 1 m to 2 m. It grows from a tuberous root. Annesorhiza is derived from the Greek words anison meaning anise or dill and rhiza meaning root, the same as the common name.

The plant has a celery-like fragrance. Its large, stalked leaves grow in a basal tuft or rosette. Annesorhiza is hysteranthous, the leaves arriving after flowering, although this species may sometimes have leaves in the flowering season.

The leaves are much divided into lobes that are acutely and angularly toothed. The leaves smell of lemon when crushed. Stem-leaves are small and few, scale-like.

The plant grows in the Northern Cape and Western Cape from the Gifberg to Springbok and Sutherland. The photo was taken near Vanrhynsdorp.

The habitat is succulent Karoo and fynbos where these plants are found on rocky slopes and flats in clayey or sandy soils. The species is not considered to be threatened in its habitat early in the twenty first century.

The anyswortel name is shared among the twelve southern African Annesorhiza species. The roots of several species have for long been eaten as a vegetable, initially among the Khoi and San people. The roots can be roasted in campfire embers, boiled in milk or stewed with meat (Manning and Goldblatt, 1997; Bond and Goldblatt, 1984; Van Wyk and Gericke, 2000; Andrew, 2017; iNaturalist; http://redlist.sanbi.org).