Home » HABITAT » Mountains » Aloe polyphylla in Lesotho
Back to Category Overview
Total images in all categories: 11,238
Total number of hits on all images: 5,948,213 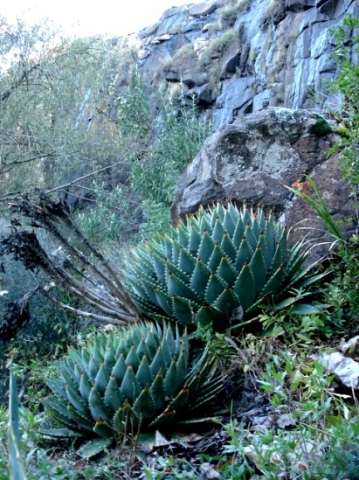 Previous
Image 5 of 73
Next

The habitat of Aloe polyphylla, in Afrikaans known as the kroonaalwyn (crown aloe), is high mountain grassland of the Malutis in Lesotho. This species is endemic to Lesotho and does not grow naturally in South Africa. The altitudes at which the plant may be found are typically above 2000 m. Rainfall is around 1000 mm per annum. This is augmented by moisture from regular cloud, mist and snow covering.

The plants in picture here, growing among basaltic rocks, present the big, single, stemless rosettes typical of the species. Branching into two or three rosettes may happen but rarely, while short stems are found on only the very big specimens.

Lesotho does provide legal protection for its most famous Aloe, prohibiting removal of the plant from its habitat. Many are, however, found growing elsewhere because they fascinate people. Some laws, especially those perceived to have lesser importance are ignored when not enforced. While nature conservation is important, perceptions are not yet as informed as they should be. Unfortunately not all horticultural specimens are today grown from seed; their popularity brings risk for the future of the species.

South Africa's National Botanical Gardens do grow and market rare plants for collectors to acquire legally at their nurseries. This helps to reduce illegal plant acquisition.

(See also the entries for this Aloe in the Aloes Album under Genera.)