Home » HABITAT » Mountains » Beyond the blue mountains
Back to Category Overview
Total images in all categories: 11,451
Total number of hits on all images: 6,213,809

Beyond the blue mountains 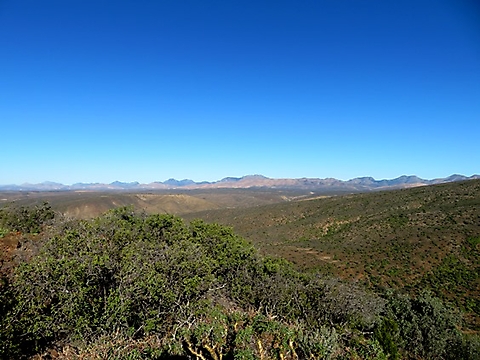 The mountain range in the distance still appeals to the wanderlust in some human hearts. The earliest ancestors could go and see what lies beyond, provided that their legs lasted and they avoided being eaten before they got there. Curiosity drove discovery. That is how we got here.

Eden was a place, possibly rather a time when our hunter-gatherer ancestors walked far and wide to find food, water and mostly temporary shelter. Before permanent houses, shops and towns there were no fences or privately owned farms, the earth was the food garden for all.

People were few enough for their impact on the environment to remain light, their place in the regional food chains of nature very real and fixed by their size, taste and capabilities. Taste here refers to two things: what people tasted like to their consumers and what people preferred to eat. All this was true for all that lived and ate, for they were and are all edible, after all.

The early people foraged with increasing skill, ate the accessible for that is what omnivores do, rejoiced in the serendipitous find or catch of the moment, while yearning for the tasty, the rare scrumptious experience stored in memory, the choice morsel of a lifetime.

Fruits, bulbs and roots were mostly seasonal, meat required other skills. Memory became collective through language, while expertise increased from past failed and successful plans of team and tribe.

Hunter-gatherers are still around us among all the animals in the wild, their specific Edens nowadays partitioned by roads and fences, covered under concrete and polluted by industry.

As many species become confronted with the impossibility of survival on the humanly adapted earth, they join the long list of disappeared species. The list of extinct species far exceeds the one of extant species. Humanity wasn't around when the earlier major extinctions occurred. Things happen, but this time we're involved.

Being the brainiest, a latecomer among them all, humanity is gradually discovering that its own Eden, albeit heavily eroded and by some accounts disappeared, depends on the continuation of the Edens of the animal, plant and other living counterparts on earth as well.

It is not fun on earth without the extended family.