Home » HABITAT » Mountains » Aristaloe aristata
Back to Category Overview
Total images in all categories: 11,901
Total number of hits on all images: 7,141,844 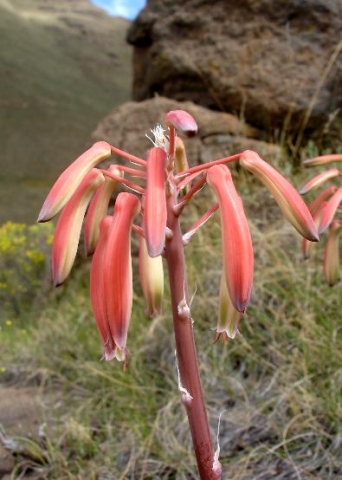 The inflorescence of this inland miniature succulent, Aristaloe aristata, encountered during November in the high elevation grassland of Lesotho’s Maluti Mountains, is unbranched although its peduncle is quite sturdy. The ground level leaf rosette, hidden in the grass, may not yet be sufficiently developed for delivering an elaborate panicle.

A common name for the plant, serelei (the slippery one), allows for speculation: If one inadvertently stepped on the succulent leaf rosette hidden at ground level in the grass, slipping would be likely. Could that be the origin of this name?

The yellow and pinkish red individual flowers, the perianths, are slightly curved with basal swellings. The petal tips, dark or green in bud here, some even bluish, are recurved with white margins once open. Also to be seen are the few dry bracts with long narrow tips on the stalk below and beneath each flower pedicel. Note how the parts of the perianths facing to the inside are paler than the rest.

A. aristata is adapted to the cold, snowy winters of this montane habitat. Equally adapted in the eastern Karoo where the summers are extremely hot, but the winters cold as well, the plant has found several responses to life challenges. Forms once identical, may later not be interchangeable in survival capacity.

The distribution of the species covers terrain ranging in altitude from 200 m to 2200 m (Van Wyk and Smith, 2003; www.flowers.org.uk).