Home » HABITAT » Mountains » Camel Rock near Constantia Nek
Back to Category Overview
Total images in all categories: 11,110
Total number of hits on all images: 5,777,939 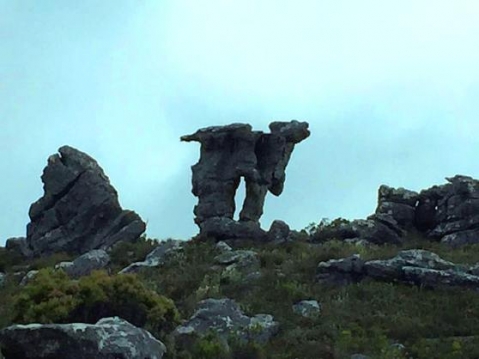 This structure called Camel Rock, silhouetted against the sky above the fynbos, is reached on a mountain hike from Constantia Nek. Another rock bearing the same name is also found in the Cape Peninsula at Scarborough.

The Table Mountain sandstone had begun to form around 800 million years ago under the seawater. Table Mountain stands, not because of its sandstone, but because of volcanic activity millions of years ago, bringing magma into play that caused the formation of hard granite, the mainstay of the Mountain. Pressures caused by the moving of continents upon their tectonic plates allowed the rise of the flat-topped structure from sea level less than 300 million years ago.

Sandstone is a relatively soft rock that erodes into funny shapes by the actions of water, ice, wind and also fire in the fynbos. Freed grains of the sandstone rock mix with decayed plant material to form the soil, from which the fynbos has kept growing for so long.

Among the plants these rock artworks of nature stand tall as this one, or flat… any old way, sculpted and destroyed by all the forces at nature’s disposal, including humans (http://www.capetown.at/).