Home » HABITAT » Mountains » Aloe comptonii: try catching it in flower!
Back to Category Overview
Total images in all categories: 11,544
Total number of hits on all images: 6,627,286 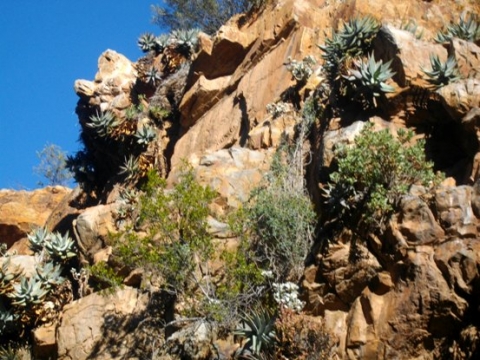 Previous
Image 3 of 81
Next

Gravity prevents soil formation on too steep slopes. Still, minuscule quantities of plant detritus turn into soil with some dust and sand that blow in. It keeps accumulating in the tiniest crevices and on suitably shaped ledge hollows of the cliffs.

Nature's seed dispersal mechanisms involve animals, birds, wind and some other, low probability contingencies. Being natural, they often fail to bring a seed to germination, but the big natural system is a model of patience, balancing random events with eternal fortitude, never stopping as long as there's to be life on earth.

Much has to go right for each plant to appear on a mountain site like this. But clearly, they do appear! The hit rate is unknown, as is the precise method nature had used in many a particular case. These unusual outcomes occur in patterns evolving slowly over much time, the exceptions broadening the patterns by adding alternative sequence streams. New ways of working appear spontaneuosly, mostly without fanfare.

Functional outcomes of untold natural processes that may dominate some day wait to be discovered by the scientifically inclined visitors to the veld on their field trips. Ordinary mortals with keen perception during leisure visits share in the revelations of micro-miracles occurring in the continually emerging and ongoing life.

The message that this spot, every spot on every unspoilt mountain, is important in the bigger scheme of things hits home when the flowers appear. Imagine this place when all those Aloe comptonii rosettes are covered in scarlet flowers next season!

Scenes like this leave the human observer in awe. People occasionally turn pensive, become transfixed. When more profound than fleeting, the feelings may overcome and an addiction to the bush is born. Hopefully with a protective sense towards the splendour of nature for delivering it to future generations to stare at.

While observation occasionally ends in significant communion and learning, even constructive decisions and actions, miracles are rare. If nature doesn't suddenly threaten on a steep slope or sudden weather change, the time spent there often ends in a vaguely pleasant sensation, a warm feeling about the bush derailed by reminders of pressing obligations waiting in the "real world".

Or speculation of a metaphysical kind: important things like humanity's place in nature, as if species were metaphysically arranged in hierarchies other than food chains and matrices.