Home » HABITAT » Mountains » A kloof in the Rooiberg
Back to Category Overview
Total images in all categories: 11,538
Total number of hits on all images: 6,618,369

A kloof in the Rooiberg 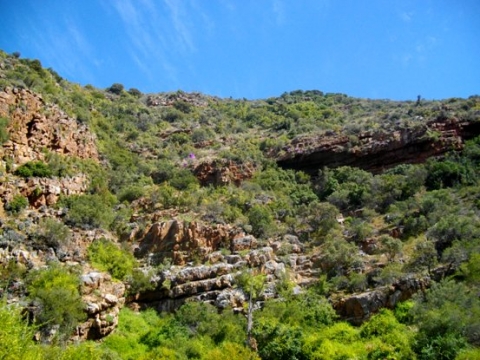 Complex geological processes during the earth’s long history formed these layers. Mammoth forces made liquid rock bulge and dip to leave the shapes. Gradual soil formation from erosion of the available stony materials, combined with the detritus of plant and animal life of millions of years have added the life-sustaining layer, a blanket of earth for earth. Water and gravity have done the rest, distributing the soil into nooks and crannies where plants can grow. Shelter for the mobile species, the animals, came from rocks and trees.

The result is unique everywhere, remarkable in some spots. Many stories could be told of how living species have come to inhabit every particular place, bestowing a unique character upon it by the evidence of lives spent there. If only there could have been a recording to present all this history in full, without guess or warp! That is like making a map of the earth as large as the earth itself.

The ephemeral or durable mark left upon the land by any one of these multiple influences, from climate to invasive species, have contributed to Nature’s indescribable complexity and beauty. It is the home, the treasure, the legacy of all species seeking collective immortality by producing offspring able to enjoy it all later. Let the new eyes look: they see on behalf of their species and their ancestors.

Since all have evolved together from the most primitive beginnings, they belong to the land as much as they may ever own it. Human nature is not only socially, but ecologically and phylogenetically formed, enmeshed by its deepest felt affinities, established during physical evolution. These affinities and anxieties are born from organic roots and links, shared by many species and never to be fully understood by science, a latecomer on the scene and a product of the endeavours of one participant species. Although science, a form of looking, is enhanced by the clarity in the eye and brain of the observer, no observer can gaze introspectively as far as its ancestral roots; some of what is deeply embedded will forever hold mystery.

At best the love for the land, called fatherland, motherland, my land or whatever land, is a love of self, a lover-land indulgence. (Strange the enjoyment of life is so patchy!) It takes only a generation or two for the link with the land to blossom fully in the offspring of the immigrant, wherever he or she chooses to settle. Soon all say: Patria! in spite of individual differences.