Home » HABITAT » Mountains » Aloidendron ramosissimum
Back to Category Overview
Total images in all categories: 11,506
Total number of hits on all images: 6,488,541 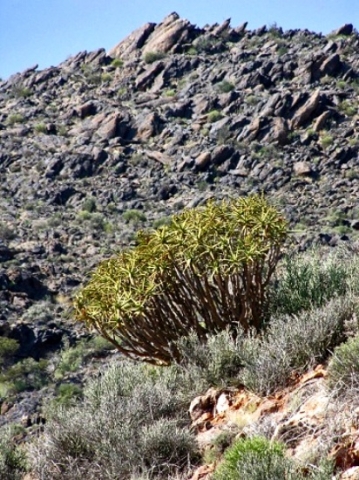 Previous
Image 8 of 81
Next

Some may think that the Richtersveld isn’t that much known for its mountains. Complex geological action over many millennia has, however, resulted in a variety of eye-catching montane formations with unusual names like the VanderSterr-Stinkfonteinberge (a tall range), Cornell’s Kop (the highest peak of the area), the Rosyntjieberg and Tatasberg.

This mountainous desert with its undulations and occasional deep gorges, not far from the Gariep River, is in season transformed into a flower covered pageant by the winter rain, even though there may not be that much of it. For the rest of the year it stoically holds on, just waiting in desiccated brown garb.

(More photos of all three these quiver trees are posted in other Albums of this Site. Use the Search Box to find them.)