Home » HABITAT » Near or in fresh water » Green slime pond
Back to Category Overview
Total images in all categories: 12,086
Total number of hits on all images: 7,380,967 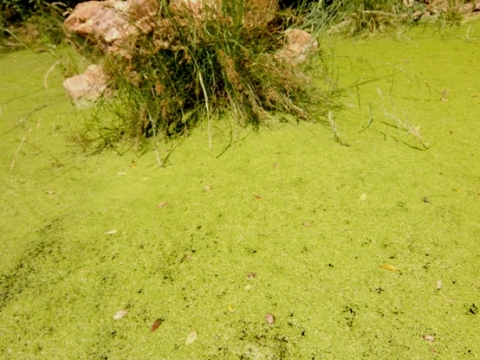 These filamentous, floating masses grow under water in spring, producing oxygen through photosynthesis when sunlight increases. The oxygen forms bubbles among the filaments, allowing the tangled material to rise to the water surface in slimy green mats as warmer weather arrives.

There are more than 400 species of Spirogyra, characterised by the spiral or helical arrangement of their chloroplasts (specialised sub-units in their cells performing photosynthesis).

Commonly called pond scum, it is generally not harmful but may strangle small fish swimming in it or damage aquatic plants. People often want to get rid of this feature of nature from their fresh water, using a wide range of control procedures (Wikipedia; http://homeguides.sfgate.com).