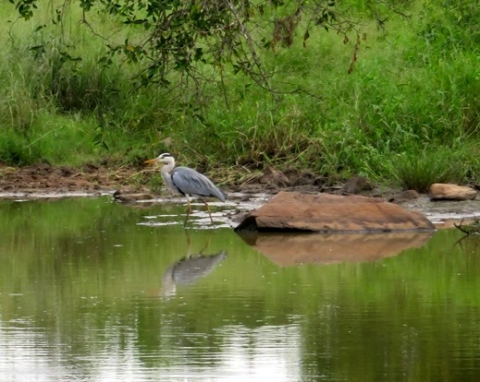 Grey herons are wading birds found in and around wetland areas like lakes, lagoons, rivers, pans, ponds, grassy marshes and the seaside in temperate areas.

Why wade? To eat! The grey heron keeps its feet wet for feeding on a range of aquatic creatures as may announce themselves on the menu, i.e. happening to be present in or near the water at the right time. A real predator, this one! It stalks its prey through the shallows and wears it out by standing stationary beside or in the water for long periods.

Its instincts, established over countless generations tell it that movement warns prey. The scrumptious target relaxes into low vigilance when no movement is detected in the immediate environment. When the lightning fast action of the bird happens, escape is usually no longer possible.

If not noticed in flight, the grey heron is often spotted when it stands stock-still. People seeking tranquillity near water are pleased by the motionless water bird contributing to a serene setting, little knowing that matters of life and death are being enacted in the looming contest of prolonged vigilance, ending in a rapid altercation between the edible and its consumer.

The human reaction depends on which way sympathy lies: marvelling at the magnificence of the hunter or siding with the loss of innocent life. The more “all” life becomes valued in the sophisticated urban society, the less appreciation of how food chains and matrices keep nature going. Conversely, the morbid preoccupation with watching endless kills in the wild indicates similar misunderstanding of its function in nature. Watching for pleasure how people live and animals die is a weird adaptation, slightly morphed from circuses in the days of the Colosseum.

Solitary repose by quiet waters rewards in soothing the spirit. When soaking up bush ambience releases the self into slow oblivion, life risk and trouble, real and imagined are removed from consciousness. Undefined therapeutic benefits accrue.

Bush communion heals, irrespective of understanding the first thing about what goes on here. The modern human is often poorly attuned to, even alien from the “green intrigue” in nature. Life and death dances, big and small, happen all around in the immediate vicinity, only the occasional one noticed or understood. Events involving “the big five” are fervently sought. How close to death serenity will venture!

Relaxation in the presence of imminent demise may be hard for those endowed with thinking, until the mind is at peace with death in the land of the living. A callous lack of compassion? Not necessarily. Merely coming to grips with renewal in nature: lasting life, finite beings.