Home » HABITAT » Near or in fresh water » Hamerkop
Back to Category Overview
Total images in all categories: 12,086
Total number of hits on all images: 7,381,164 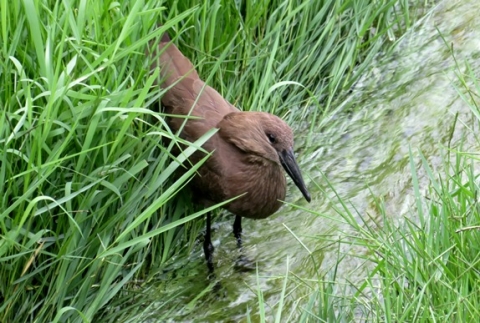 And what might you be up to? One should not be surprised to find this bird, the hamerkop, busy in or near water.

Hamerkop, a medium-sized wader bird, is scientifically known as Scopus umbretta. Its common name, hamerkop, means hammer head (Afrikaans). One look at it explains the origin of this name.

The scientific name is not that transparent. Scopus is said to be derived from the Greek skia meaning shadow, a murky explanation. Umbra also means shadow (Latin); the guess regarding umbretta might arrive at modified pistol or feathery shadow.

Hamerkops are most abundant near fresh water all over Africa, sometimes venturing into the dry terrain as well. They wade and forage in shallow water or fly slowly over the water, catching surface swimmers leisurely during extended meals. Such a good habit to take one's time over lunch and dinner in the interests of proper digestion!

Platanna frogs are important in the hamerkop diet. So are fish and many aquatic invertebrates. Small mammals like rodents are for special occasions. Flying termites, when on offer after a rainy spell following a dry season, allow for displaying the hamerkop aerobatic hunting prowess. They deftly capture numbers of termites in flight, several in quick succession.

Hamerkop nests are remarkable in size and strength. The nest of 2 m in diameter has a roof of at least 1 m thick. A nest may weigh up to 50 kg and is usually strong enough for a full-grown man to stand on top of it.

The nest has an oven-shape structure with side entrance. It is built from masses of sticks, bones, weeds, reeds and many other kinds of debris, collected by the pair of prospective parents. The inside of the chamber is mud-plastered, the opening deliberately out-of-the-way to avoid prowlers, mostly egg thieves and child molesters.

The nest is positioned in a tall tree, on an inaccessible cliff, in a secluded spot on the ground or a sandbank. It may take six months to complete, building regulations being what they are.

Continual home improvement and home maintenance projects are hamerkop hobbies. Hamerkops work diligently during daylight hours until dusk. Rest breaks are taken around midday. Labour unions have no influence on the exemplary hamerkop productivity. They don’t talk to themselves or mutter under their breath while working alone; the hamerkop call is heard when mates share time or when social groups gather.

Building a nest without a breeding plan also happens. Hamerkop community-mindedness may result in abandoned, out of season nests for owls, snakes, genets or bees to occupy without thanks or mortgage plan. Owls may fancy and forcibly occupy a new hamerkop nest, compelling the couple to build another for their own needs... no good deed goes unpunished, even in hamerkop world.

After all this, about 3 white eggs are laid; hatched in about a month. In South Africa hamerkops breed at any time from midwinter to midsummer. In some African regions it happens all year round. Both parents take part in incubation and feeding the young (Maclean, 1993; Wikipedia; http://what-when-how.com).