Home » HABITAT » Near or in fresh water » Egrets, heron and hippo
Back to Category Overview
Total images in all categories: 11,528
Total number of hits on all images: 6,611,397 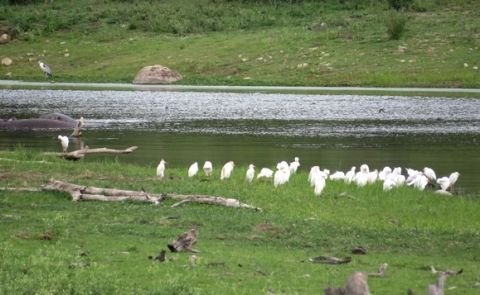 Whoever they are, the peaceful riverbank pleases them all as it does the grey heron keeping its own company on the far side of the river. Motionless and solitary by the waterside, it is a fearsome sight to frogs in the shallows, unsure whether sitting still is still the right tactic.

Whether hungry, relaxing in post-prandial snugness or dreading being consumed by somebody higher up in the food chain at any moment, all remain inert for now, fitting the still-life deception of bush serenity.

A couple of barely noticed hippos are enjoying an extended swim in the middle of the multinational gathering. And the idea of crocodile, never far in the lower parts of the eponymous river, forces the eye to scrutinise every suspicious looking log lying close by on the bank.