Home » HABITAT » Near or in fresh water » Egyptian geese by the Crocodile River
Back to Category Overview
Total images in all categories: 11,544
Total number of hits on all images: 6,625,988

Egyptian geese by the Crocodile River 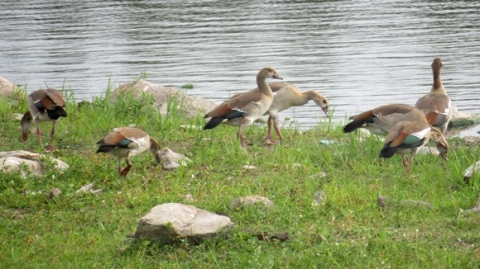 The Egyptian goose or kolgans (spot or blotch goose) occurs everywhere in southern Africa as well as in big parts of Africa, the Middle East and southern Europe. Spending time near water such as here at Mjejane Game Reserve is quite up its alley.

These gregarious birds eat grass, seeds, particularly grain and crop seedlings, creating poor relations with some farmers, especially when arriving in large numbers. Large flocks congregate outside the breeding season when the new parents have concluded proceedings. The waterside diet will include aquatic rhizomes and tubers.

Egyptian geese are versatile as far as nesting is concerned: apart from a common choice, the shallow, grass-lined hollow in the ground, it may pick a high branch in a tree, a tall building, cliff, cave or abandoned nest of a crow, raptor or hamerkop. The chosen spot may be near water or more than a kilometre away.

The eggs hatch after four weeks or a couple of days longer; only the mother sits on the eggs. The newly hatched jump from the nest on cue from the mother’s call, sometimes dropping from an alarming height and walk away as if they do that all the time (Maclean, 1993).