Home » HABITAT » Near or in fresh water » How clean is your water?
Back to Category Overview
Total images in all categories: 11,793
Total number of hits on all images: 6,942,192

How clean is your water? 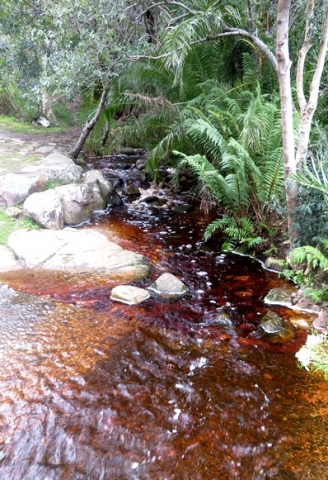 The Third World War will be about water! This statement has become a cliché among people who turn the tap and give the eventuality of universal thirst little thought.

Alarming stories about climate change, weather vagaries and people going without clean drinking water are at varying distances from the individual's lifestyle. Life goes on for many amidst a plethora of other burning issues to occupy minds. Thinking water only happens when the tap is dry, or when we are free to stand watching the clean or polluted river.

The children may call this one the Coca-Cola or Pepsi River where the Western and Eastern Cape vegetation roots often brown the river water like this. It’s good to drink, no cause for alarm as people living in these parts will tell you.

Good drinking water is clean water although not pure water. There’s always something in the water we use, also when it’s not grey water. The something or other was always in there, was recently added but nothing to worry about, is known or unknown to users, will cause alarm when people find out, is something in our local reservoir that we’re used to by now, or: the authorities better deal with it urgently!

The science behind water conservation and purification is the responsibility of somebody clever and qualified. Such a somebody works in a backroom and does not communicate publicly much, unless there’s a crisis. One of the science geek kids in the neighbourhood wants to study that stuff. Imagine that! It's a good thing though, for we’ll always need such services.

When we take time to reflect on the beauty of a stream like this, the facts of finite supply, drought seasons, increasing population numbers and escalating water usage niggle the mind. Water related hardship is a reality in the lives of many people on earth, their numbers rising. People everywhere will have to become a lot smarter and conscientious about water use and conservation.