Home » HABITAT » Near or in fresh water » Kniphofia fluviatilis by a Maluti mountain stream
Back to Category Overview
Total images in all categories: 11,756
Total number of hits on all images: 6,902,370 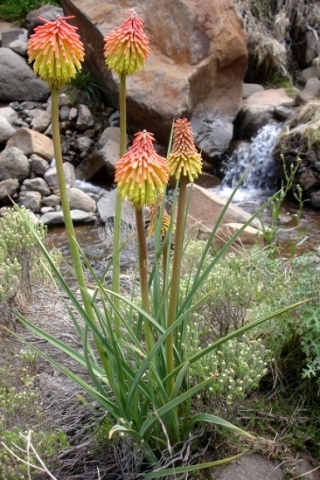 Kniphofia fluviatilis grows here at high altitude in the Maluti grasslands of Lesotho. The distribution of the species lies from Gauteng to Swaziland and southwards along the Drakensberg into Lesotho.

The river poker, as the species is commonly known, has found itself the perfect place to live next to a mountain stream. Flowering in January, the plant displays its usual clump of dull, grey-green leaves and dense racemes of nodding, tubular flowers. The youngest buds at the top are red, turning orange as they reach their full length, then yellow when they open. The perianths become up to 5 cm long. Their stamens are exserted upon opening, but later become retracted and disappear inside the corolla mouth (Manning, 2009).