Home » GENERA Q-S » Senecio » Senecio cinerascens flowerheads
Back to Category Overview
Total images in all categories: 11,921
Total number of hits on all images: 7,169,950 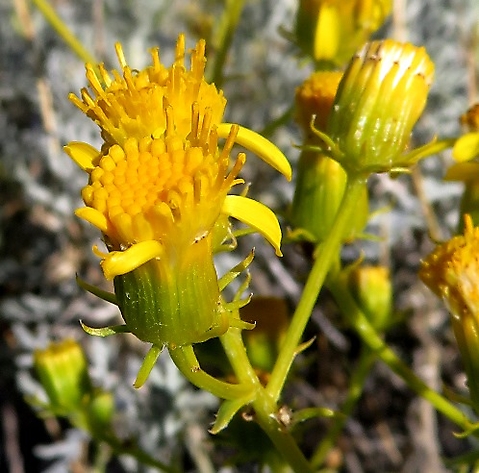 Apart from the single row of involucral bracts cohering along their margins to form the cup-shape of the Senecio cinerascens flowerhead, there is a conspicuous ring of fleshy, green bracteoles protruding from the cup base. The narrowly oblong bracteoles are flat on top with pointed, curved-up tips. It is thought that these bracteoles, spreading finger-like around the heads, earned the plant its Afrikaans common name of handjiesbos (little hands bush).

The occasional bract may also occur on the peduncle, while one is normally present below the base of each peduncle, sometimes toothed along its upper margin.

The few, narrow-limbed ray florets are female. There are rarely more than five of them. The disc florets are round-tipped in bud, the outer, open ones five-lobed and bisexual with stamens and style exserted. A flowerhead becomes up to 2 cm in diameter (Le Roux, et al, 2005; Manning, 2009; Bond and Goldblatt, 1984; iNaturalist).