Home » GENERA Q-S » Senecio » Senecio cinerascens
Back to Category Overview
Total images in all categories: 11,544
Total number of hits on all images: 6,625,920 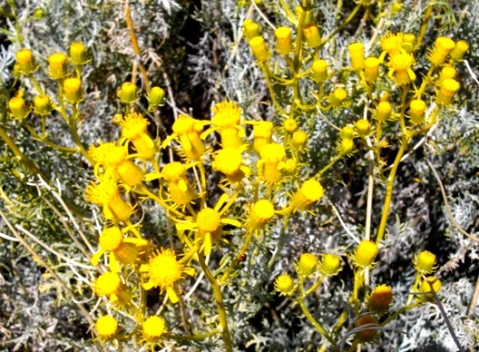 The white-woolly leaves are deeply divided into narrow segments, the margins rolled under. Leaves may be up to 10 cm long.

The inflorescences grow in loosely branched clusters, about flat-topped, well above the leaves. The flowerheads consist of yellow discs surrounded by a sparse ring of small, narrow rays, also yellow. There are about ten flowerheads per cluster, each head becoming about 2 cm wide. One row of almost free involucral bracts form the cylindrical cup with abrupt, angular base. Flowering happens from midwinter to early spring.

The species distribution is mostly in the Northern Cape, from the Richtersveld and Namaqualand into the northern parts of the Western Cape to around Clanwilliam. The plant also occurs in Namibia. This one was seen in the Ceres Karoo.

The habitat is rocky slopes in arid and semi-arid places. The species is not considered to be threatened in its habitat early in the twenty first century (Le Roux, et al, 2005; Manning, 2009; Bond and Goldblatt, 1984; iSpot; http://redlist.sanbi.org).