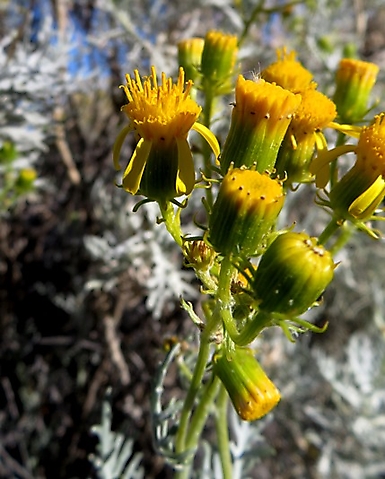 The brown-tipped involucral bracts give an indication of Senecio cinerascens disc floret elongation.

In the bud stage the bract tips initially reach each other on the bud’s top. A little later there is a growing, whitish, disc-shaped patch in the centre as internal growth separates the bract tips.

In the second stage the bract tips are as long as the disc florets, forming a ring of dark dots around the upper surface of disc bud tips. No ray florets have appeared at this stage yet.

Then the third stage has disc floret tubes at their full length, the dark dots visible a little lower than the disc floret tips; still no sign of ray florets and no disc florets open yet.

In the fourth stage the ray florets have appeared, their limbs or blades sagging around the involucre at the level of the bract tips. The open disc florets are taller now, their stamen cylinders and out-curving style branches well exserted (Le Roux, et al, 2005; Manning, 2009; Bond and Goldblatt, 1984; iNaturalist).