Home » GENERA Q-S » Senecio » Senecio cinerascens pollinator
Back to Category Overview
Total images in all categories: 12,068
Total number of hits on all images: 7,363,204 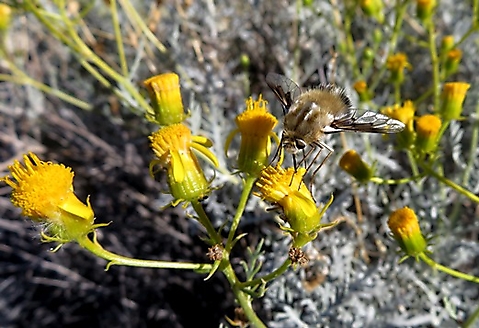 When a Senecio cinerascens inflorescence is honoured by a visitor, the insect does not require a long tongue to enjoy its meal. Bees are important among Asteraceae pollinators because of their numbers and diversity, but flies and others are also served.

Many Asteraceae species bear numerous, small florets close together, the little nectar and pollen per floret easily accessible to many kinds of insects. The daisy plant’s advantage is that many of its tiny florets can get pollinated quickly by one hungry guest.

Ray florets serve to make flowerheads conspicuous and attractive to pollinators. Nectar is often secreted by a ring-shaped disc found at the base of the style in the corolla tube of daisy florets.

Food is food and diners of different ilk will use their insect versions of spoon, knife and fork, chopsticks or hands to sate themselves. The mouth part of the eating insect is plunged into the daisy floret, brushing against the inward facing pollen surfaces forming an anther tube.

The immature style elongates inside this anther tube, pushing the still furled style branches up the tube. As the young style grows taller within the anther tube, it brushes the already ripe pollen grains of its own floret’s anthers onto specialized hairs located on the style. These hairs are below the yet unopened style branches, where the yet unreceptive stigmas are at this stage left unaffected.

Pollen presented thus from another floral structure, the style hairs in this case and not from the anthers directly, is called secondary pollination.

Enter the insect, the pollen on the style hairs is presented to it as food, while nothing happens on the still unreceptive stigmas. But once the stigmas becomes receptive, the style branches spread. Now they can receive pollen flown in by insects from other florets of the same species, while shunning own pollen stuck on the style hairs below.

In this way florets become cross-pollinated, the resulting seeds having characteristics of both parent plants in the unique, new member of the species, sometimes a notable new variety. Own pollen received on the stigma could only replicate the same plant's attributes, not create the new combination, so it is best donated to the probing insects.

This keeps them interested and sustains the cross-pollination "industry" between flowering plants and pollinators, resulting in robust species and the evolutionary events of speciation.

Should cross-pollination not happen in some daisy florets by the end of the stigma’s receptive period, the style branches curl down and self-pollinate from the stock still waiting on the pollen-covered style hairs.