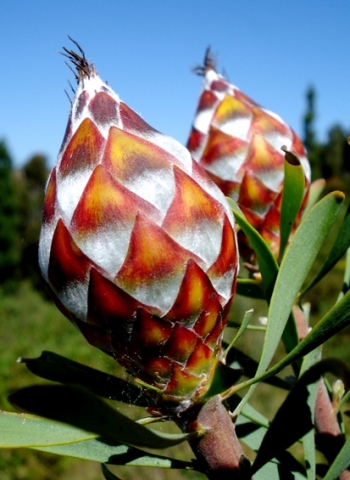 The female cone of Leucadendron rubrum looks like the spinning top that has become the plant’s common name. The leaves immediately below the flowerheads are similar in shape to the ordinary leaves, but yellow in colour. This colouring is lost when the cones age.

The female cone is 2 cm wide, green with (later in its cycle) brown on the involucral bract tips; the cone is egg-shaped, but for its conical tip. As the florets mature in the female cone, the stigmas protrude at the tip of the cone. When this cone dries out, the bracts open and the cone loses its characteristic, easily recognised shape.

The specific name, rubrum, meaning red (Latin), probably refers to the colour of the dry bracts. The ripe fruits, small nuts, are attached to fluffy hair clusters that facilitate flight upon release in dispersal.

The male flowerheads, 5 mm wide, grow in small clusters at stem tips. When ripe, they appear unkempt from many yellowish stamens.