Home » GENERA I-L » Leucadendron » Leucadendron sessile
Back to Category Overview
Total images in all categories: 11,037
Total number of hits on all images: 5,688,203 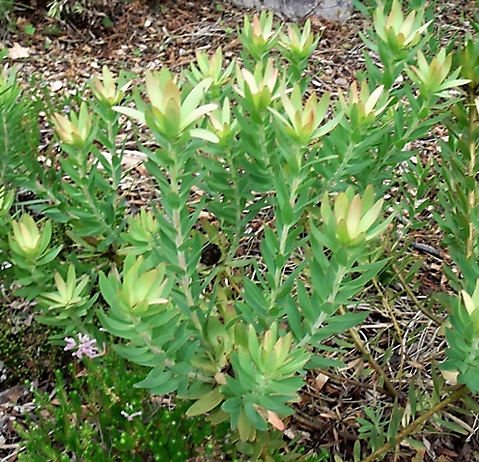 Leucadendron sessile, commonly known as the western sunbush and in Afrikaans as the kleinkoprosettolbos (small head rosette conebush), is a single-stemmed, rounded shrub reaching 1,5 m in height.

Flowering happens in the later part of winter. The male plants have erect brown bracts below flowerheads that become 3,5 cm long. Female bushes bear lemon-scented flowerheads only up to 1,8 cm long.

The plants are insect-pollinated, while the fruits are dispersed by rodents that carry them off as food to underground caches.

The species distribution is in the southwest of the Western Cape from Ceres and Worcester to Somerset West and Caledon.

The habitat is fynbos on lower granite, shale and sandstone slopes and flats. The species is considered to be near threatened in its habitat early in the twenty first century, due to habitat loss, invasion by alien vegetation and too frequent fires (Manning, 2007; Bean and Johns, 2005; Bond and Goldblatt, 1984; iNaturalist; http://redlist.sanbi.org).