Home » GENERA I-L » Leucadendron » Leucadendron rubrum
Back to Category Overview
Total images in all categories: 10,856
Total number of hits on all images: 5,516,195 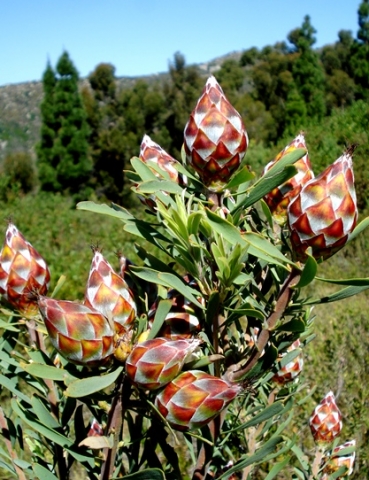 Leucadendron rubrum, commonly known in Afrikaans as the dikkopeierbos (dikkop egg bush), is an erect shrub reaching heights around 2,5 m. The plant grows from a single stem that branches above-ground, making it a reseeder after fire, not a resprouter.

The lance-shaped leaves are hairy when young, glabrous later. The leaves are narrow and twisted at the base, becoming over 3 cm long on male plants, up to 7 cm on female ones.

The species distribution is in the Western and Eastern Cape, from Ceres to Baviaanskloof and Humansdorp. The plant grows on sandstone fynbos mountain slopes that may be arid or moist, at elevations from 250 m to 1500 m. The species is not considered to be threatened in its habitat early in the twenty first century (Vlok and Schutte-Vlok, 2010; Manning, 2007; www.plantzafrica.com; www.redlist.sanbi.org).