Home » GENERA I-L » Leucadendron » Leucadendron pubescens
Back to Category Overview
Total images in all categories: 11,037
Total number of hits on all images: 5,688,451 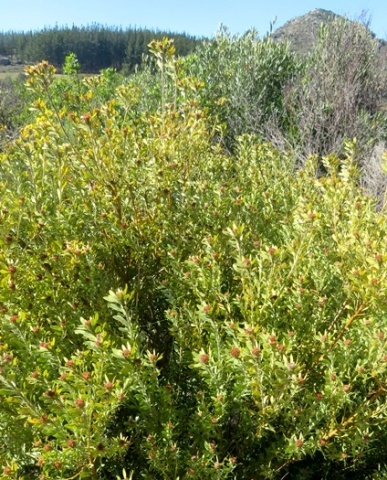 Leucadendron pubescens, the grey conebush or silky conebush and in Afrikaans pitjiebos (little seed or nut bush) and previously L. pillansii, is an erect to rounded, branched shrub growing from a single stem to 2,5 m in height (SA Tree List No. 81.3). It does not resprout after fire.

In picture is a male shrub blooming in August on the mountain near Piketberg. The species distribution is in the west of the Western Cape, from the Bokkeveld to the Witteberg and the Klein Swartberg Mountains.

The habitat is dry fynbos of the winter rainfall area, the plants growing on sandstone derived slopes. The plants may form dense stands. The species is not considered to be threatened in its habitat early in the twenty first century (Vlok and Schutte-Vlok, 2010; Paterson-Jones and Manning, 2007; Coates Palgrave, 2002; iNaturalist; http://redlist.sanbi.org).