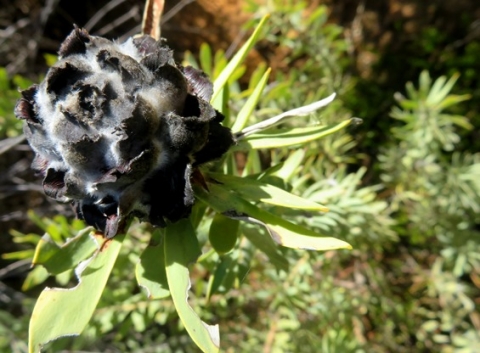 The old female cone of Leucadendron pubescens is still white-woolly in parts, after the bracts have dried, opened and contorted more than recurved. Or the woolliness may have increased as the cone aged.

The cones of this Leucadendron open in the same season they bloom, the fruits shed freshly, not waiting upon the bush for fire even after many years as some other conebushes do. Germination may, however, still be triggered by fire while they are on the ground, then stimulated by rain. Some seeds produced in hard covers may have to be aged, soaked, fired or even eroded by digestive juices of some bird or animal before the cover is sufficiently weakened for a response to moisture.

Apart from having been eaten, the involucral leaves protruding below the cone in picture look the same as the general foliage in this species (Vlok and Schutte-Vlok, 2010; Paterson-Jones and Manning, 2007; Coates Palgrave, 2002; iNaturalist).