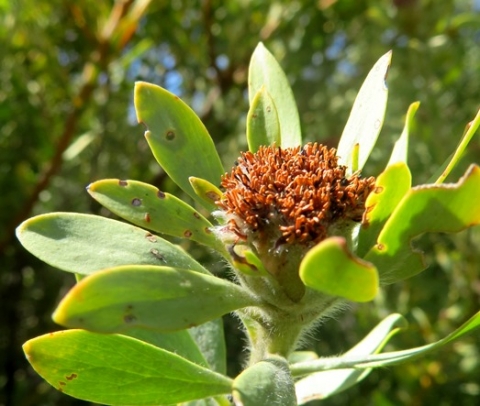 Male Leucadendron pubescens flowerheads bearing pollen do not look like cones at all. The capitate, flat-topped flowerhead comprises a multitude of tiny florets, densely clustered. It becomes 9 mm to 18 mm in diameter.

Flowering of L. pubescens happens from midwinter to after midspring. This old flowerhead was photographed in August. Young male flowerheads are greenish yellow or creamy.

The elliptic to oblanceolate leaves of the plant are hairless or silver-haired. In picture the hairiness is localised near the base of lower surfaces, on petioles and upper stems. Leave on male bushes of this Leucadendron are shorter, from 16 mm to 28 mm, compared to the female bushes that have leaves ranging from 25 mm to 57 mm in length. The leaf-tip may sometimes be rounded, commonly tapering to an acute point (Vlok and Schutte-Vlok, 2010; Paterson-Jones and Manning, 2007; Coates Palgrave, 2002; iNaturalist).