Home » GENERA T-Z » Zaluzianskya » Zaluzianskya affinis
Back to Category Overview
Total images in all categories: 11,276
Total number of hits on all images: 5,987,761 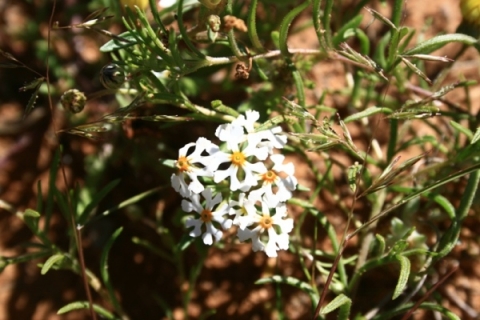 Previous
Image 1 of 22
Next

Zaluzianskya affinis is an annual reaching heights from 2 cm to 30 cm. The plant is commonly called northern purple drumsticks (or northern lilac drumsticks), differing from the southern purple (or lilac) drumsticks only insofar as its leaves are narrower and have sharply pointed tips. The leaves, particularly the upper ones, are alternate on the branched, hairy stems.

The flowers grow in dense spikes, white or pink to lilac in colour. Each flower has a long, thin corolla tube ending in five oblong petal lobes, widening and deeply notched at their tips. A yellow or orange eye or star forms the flower centre. The flowers open in the afternoon and have a distinct honey scent at night. Flowering happens in winter and spring.

Z. affinis is found on coastal, sandy flats in Namaqualand from the Olifants River in the south and inland towards Springbok, northwards into the Richtersveld.

The habitat is mostly coastal sandy and rocky flats in arid fynbos and renosterveld. The species is not considered to be threatened in its habitat early in the twenty first century.

The genus received the drumsticks name from the shape of the buds of some species. The buds are sometimes dull to dark red (Manning, 2009; Eliovson, 1990; http://redlist.sanbi.org).