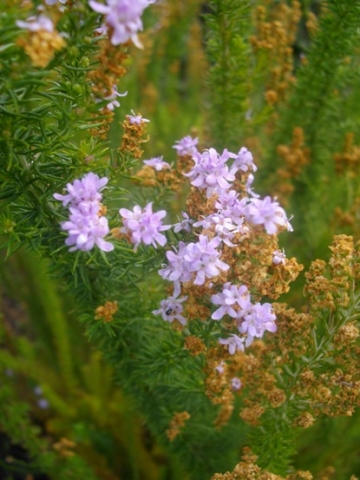 Previous
Image 3 of 19
Next

Selago canescens, commonly the bitter bush and in Afrikaans the blou aarbossie (little blue vein bush), is an evergreen shrublet bearing many slender, erect stems to heights from 30 cm to 45 cm.

The blue in the common name refers to mauve flowers seen in late winter to early spring. The reference to veins refers to the tendency of the shrub to “seek” out areas where underground water flows; probably leading to drilling projects decided upon the free water divining information. Its success rate unknown!

The distribution is from the Cape Peninsula to the Eastern Cape. The plants grow on dry, coastal slopes. It is not considered to be threatened in its habitat early in the twenty first century.

Some sources place the Selago genus in a more restricted family, the Selaginaceae. Scrophulariaceae still seems to be correct though (Bond and Goldblatt, 1984; Privett and Lutzeyer, 2010; www.plantzafrica.com; http://redlist.sanbi.org).