Home » GENERA Q-S » Selago » Selago divaricata
Back to Category Overview
Total images in all categories: 11,112
Total number of hits on all images: 5,778,912 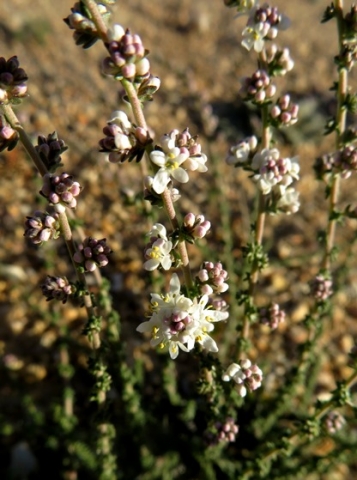 Previous
Image 7 of 26
Next

Selago divaricata, previously S. minutissima and earlier Walafrida merxmuelleri, is commonly known as muishondbos (mongoose bush), a name shared with a couple of pelargoniums including Pelargonium quercifolium. There is an earlier name, t'gibbiebos (t’gibbie bush), from the days the Nama and other Khoi tribes lived in the region where these plants grow. It is a lax shrublet reaching 30 cm to 40 cm in height, depending much on the rainfall.

The species is found in Namaqualand in the Northern Cape from Steinkopf southwards, maybe in Namibia. The photo was taken at Naries, west of Springbok.

The habitat is rocky places in arid winter rainfall conditions where the plants grow in sandy soil. The species is not considered to be threatened in its habitat early in the twenty first century (Williamson, 2010; Le Roux, et al, 2005; iNaturalist; JSTOR; http://redlist.sanbi.org).