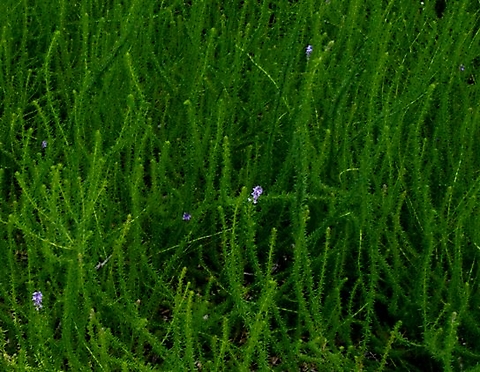 Selago is a genus in the Scrophulariaceae family consisting of perennial herbs, a few annuals and largely shrubs. Some grow from woody rootstocks and resprout after fire. The stems are erect, or decumbent. Stems, leaves and bracts are hairy.

The often small leaves are usually alternate, often fascicled. When opposite, they are mostly positioned near the base of the plant. The leaf-shape is narrow and oblong or elliptic to spoon-shaped. The margins are usually entire, only toothed in few species, or uncommonly in some plants.

The flowers are subtended by bracts that may cling to the stem, sometimes free. The inflorescence is often a spike or raceme, pedicels being short where present, while flowers of some species grow solitary or appear in corymbs or panicles. Inflorescences often elongate during fruiting. The three to five-lobed calyx is regular in some of the species.

The corolla is tubular, cylindrical to funnel-shaped, two-lipped and usually five-lobed, sometimes four-lobed and wheel-shaped with the oblong or obovate lobes spreading. The lower lip has three short lobes, the upper lip one or two. The upper lip folds over the lower one in the bud phase.

There are usually four stamens in two unequal pairs per flower, concealed in the upper lip. The ovoid to nearly globose ovary has two locules in most species, harbouring one ovule in each. The paired, rounded fruits contain one seed each.

There are about 190 species of Selago, mostly in the Western and Eastern Cape and only few as far as tropical Africa and Madagascar. Some species are palatable to game and stock, others not at all.