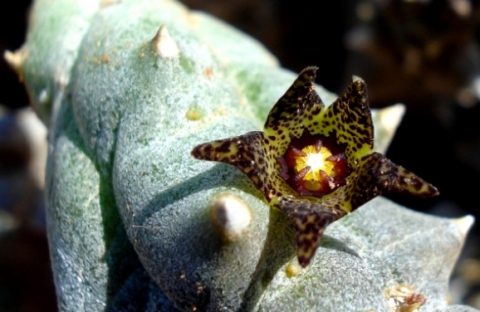 Quaqua acutiloba, previously known as Caralluma acutiloba, C. ortholoba and C. wilfriedii respectively at different periods in its botanical history, is a clump-forming stem succulent reaching heights around 18 cm. The four-angled, brown to grey-green stems, up to 18 mm thick, have columns of bulging, conical tubercles along their surfaces, each tubercle hardened at its tip.

The five-pointed, cup-shaped flowers emerge from upper stem grooves on short pedicels. The corolla has narrow, ascending lobes that taper to acute tips. The flower colour is variable, in several shades of brownish-black spots on a dull yellow to greenish background. The spots tend to be denser near the lobe tips. Corolla diameter is about 1 cm.

The dark purple, five-lobed outer corona spreads, each lobe split, ending in a pair of triangular tips. The inner corona has five paler, purple-brown, linear lobes converging in the centre over the anthers without touching each other.

The species distribution in the Northern Cape includes parts of the Richtersveld and Namaqualand in places with names like Lekkersing, Annisfontein and Steinkopf. The habitat is arid stony slopes. The plant is not considered to be threatened in its habitat early in the twenty first century (Williamson, 2010; White and Sloane, 1937; www.redlist.sanbi.org).