Home » GENERA Q-S » Quaqua » Quaqua mammillaris flower
Back to Category Overview
Total images in all categories: 10,352
Total number of hits on all images: 5,055,561 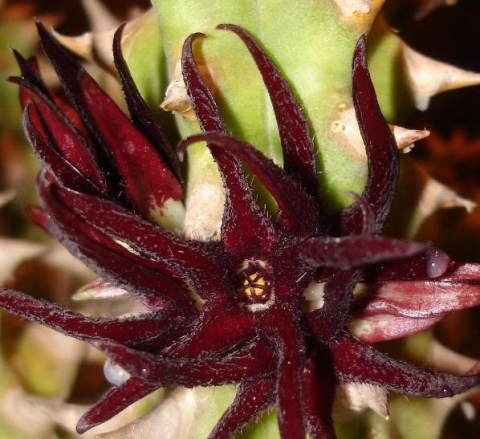 The flowers of Quaqua mammillaris grow in fascicles of four to ten from the grooves between stem angles in the upper stem parts. Most flowers usually open simultaneously, exuding a foul smell. Flowering happens late in autumn and early in winter.

The long, thin black-purple to maroon petal lobes of the star-shaped flower spread and often angle up. The margins are rolled under, the tips acutely pointed and sometimes with a little twist near the tip. The corolla inside surface is covered in small papillae topped by hairs. Flower diameter is about 2,5 cm.

The flower centre has an outer and inner corona, tiny floral components. The dark purple-brown outer corona is cup-shaped and toothed but hairless, about as long as the staminal column. The inner corona has linear lobes on the backs of the anthers, appearing like a dark star on a cream background (White and Sloane, 1937; Frandsen, 2017; Vlok and Schutte-Vlok, 2015; Le Roux, et al, 2005).