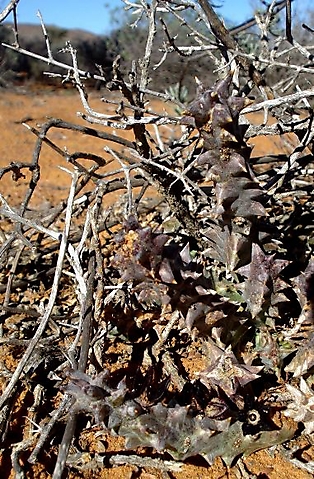 Quaqua armata subsp. maritima is a robust stem succulent that forms a large clump, up to 60 cm in diameter.

The erect stems may be up to 20 cm long, their dull purple surfaces powdery. The sharp and hard, deltoid spines on the conical stem tubercles of the “armoured” Quaqua are beige-brown.

This member of the Apocynaceae family, previously the Asclepiadaceae, grows naturally in the coastal west of the Northern Cape in Namaqualand and the northwest of the Western Cape.

The plants grow mainly on coastal, sandy flats. This subspecies is not considered to be threatened in its habitat early in the twenty first century (Frandsen, 2017; White and Sloane, 1937; iNaturalist; http://redlist.sanbi.org).