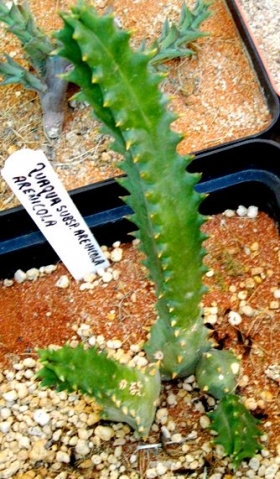 The plant is a stem succulent growing clumps of erect four-angled stems to heights around 10 cm. The hairless stems, branching at the base are green in moisture-rich luxury here, but mostly in duller grey-green or blue-green shades when hiding among veld shrubs in its real world. The square stems may be 2,5 cm thick; spaced teeth conspicuous down the four vertical stem ridges.

Deep maroon, spidery flowers dominated by five long, thin corolla lobes grow in small clusters from the side of stems. They reach 2,5 cm in diameter and have tiny papillae growing on the folded-in upper corolla surfaces. The flower tube is cup-shaped to bell-shaped, pale in the centre, where the lobed inner corona is centred in the saucer-like outer corona that has yellow teeth tipped purple.

The paired fruits, the follicles are smooth, slightly diverging and tapering at both ends.

The species grows in arid parts of inland Western Cape, Eastern Cape and the Northern Cape. The plant is found near places like Laingsburg, Matjiesfontein, Oudtshoorn and Prince Albert. The Latin specific name of arenicola means inhabiting sandy places. The subspecies is not considered to be threatened in its habitat early in the twenty first century (White and Sloane, 1937; www.redlist.sanbi.org).